Over the years I’ve adapted and changed my modelling methods as new ideas, materials and techniques have appeared. During the early 1970’s I frequently experimented with  ‘Pyruma’, a type of fire cement once sold by many model shops. The idea was to cover the shell of a building, wall or other structure with it, and once dry to scribe stone or brickwork into its surface. These days ‘DAS’ modelling clay is a more agreeable alternative.

Penhydd station building followed next, which was based upon the old ‘Prototype Models’ card kit of the building at Chalford. I scanned and copied the kit components onto plain card stock, then cut them out to use as templates, thus saving myself  a lot of measuring and marking out, and as a bonus I was left with  the original kit for another day.  I think it was the combined roof and canopy that attracted me to this particular building, but true to form I didn’t model it accurately. Instead I made a few minor changes to suit my needs and the space available. The real building was built from brick and the kit follows that faithfully, but I wanted a stone structure. So the walls were overlaid with Slaters embossed stone sheet. Windows and doors were built up from styrene strip, and the roof was made from Wills slates. The rainwater goods also came from Wills material packs, and the little detailing bits and pieces from a variety of sources.

Penhydd station building as it appeared in MRJ No.211. 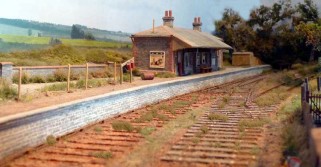 The end for Penhydd came on the 11th May 2013, but the old building still survives. The small details such as the weighing, and chocolate machines, seats and fire buckets were salvaged and eventually found their way to Llangunllo.

Rather than use card I built the shell of the building from styrene sheet, then overlaid it with Slaters embossed stone. The slate roof and rainwater goods were sourced from the Wills material packs.

The rear of the building was rarely seen in photographs. I even went as far as modelling the gents urinals, as being open to the elements I felt they would be noticed.

When this photo was taken, the Brassmasters etched windows and scratch built styrene doors had just been fitted, and glazed. They were later toned down with washes of dirt. As usual the stonework was painted with mixes of light, and dark earth enamels, over a base coat of ‘Oatmeal’ emulsion paint from a test poy.

Llangunllo Mk1 ceased to exist on the 22nd March 2016. The goods shed had already been removed when this photo was taken, and like the station building it survives in store.

William Clarke provided the inspiration for the original Llangunllo station building, after all the one at Presteign had been built to his design. So it wasn’t unreasonable to think that the same style of building might have been used further up the line. Barry Norman suggested that a model of New Radnor station building might suit the bill, and he certainly had a point. However when I made a card mock up, the size of the building took me by surprise, it was huge and looked out of place. So the idea was dropped and I returned to my original plans. With the benefit of hindsight I should have adjusted a few of the buildings measurements and  its basic proportions. A lesson that was put to good use when I came to rebuild Llangunllo. As a matter of interest Paul Marshall-Potter paid a visit to New Radnor, and recorded the scene as it is today. You can view some  photos,  and read all about his visit, and some interesting ideas on modelling the station here.

Gerry Beale had written an extremely interesting article titled ‘The Standard Buildings of William Clarke’, which appeared in the ‘British Railway Journal No.8’. Included within its pages were plans for Portesham station building, and that is how I came to build my version of it.

‘Palight’ and ‘Foamex’,  are very firm, take scribed detail with ease, and cut cleanly, in fact they look, and feel like styrene sheet.

I’ve found that a simple scalpel blade makes it easier to get a true edge when cutting the board, and use a curved blade for carving it. For scribing stonework I use a pointed knife blade, nicked from my better halves cake decorating kit ( she hasn’t missed it yet) and a pin vice. Nail file boards come in handy for cleaning surfaces up, and general shaping.

Having experimented with ‘Pyruma’, card and styrene sheet I broke new ground when I came to model my version of ‘Limekilns’ station building. My old friend Iain Robinson whose name keeps cropping up within these pages can be blamed for that. For not only has his architectural, and general model making skills inspired me over the years, but he also introduced me to ‘Palight’ foamboard. Now I had heard about this new model making medium but had bought an inferior brand which was far too soft, and didn’t take scribed detail cleanly, it also had a tendency to dissolve in front of your eyes if it came into contact with any solvents. However the samples that Iain sent me were completely different, looking and feeling just like thick styrene sheet.

The station building is based on the proposed, but never built building for Limekilns,  latterly known as Dolyhir, which can be found between Kington and New Radnor. Not only was the station renamed, but it ended up with a smaller building to the same design as those at Stanner, and New Radnor.

The stonework was scribed into the surface of the foamboard. Quoins and decorative stonework around the windows and doors are from the Wills range, but have been reduced in size, other detail is from styrene sheet, as is the roof.

The window frames and door furniture are from the Brassmasters range of etches, glazing is from an old CD case, the doors, and rainwater goods were scratch built from styrene. I used York Modelmaking slates on the roof, which being self adhesive can be the very devil to lay, but I got there in the end. Ridge tiles are from 5 thou styrene sheet, and the water standpipe is a moulding from the Ratio concrete fence post kit.

The stove chimney is leaning just like the one on the roof of New Radnor station building. I decided not to model the ornate barge boards and valances, as I wanted to avoid the chocolate box look. After all this is the 50’s, and the railway network was in a sorry state of repair.

Superglue is the recommended adhesive for joining foamboard but I’ve found Bostick all purpose clear, used slightly wet works fine with ‘Palight’ and ‘Foamex’. Styrene detail such as the plinths, quoins, sills, etc, etc are easily secured with Butanone. Any gaps and joints can be filled with Milliput, then sanded flush and scribed if needed. Once the walls were complete I sprayed the whole model with Halfords white acrylic primer. Painting can then be carried out in the normal manner with enamels, acrylics and even emulsion. The actual colours used were my usual mixes of Humbrol light and dark earth, over an undercoat of ‘Oatmeal’ emulsion, which gives a good representation of mortar. Individual stones were picked out by dry brushing variations of the same enamels, and finally the building was given a dusting of talc to blend everything together. So ends my tale of constructing station buildings.

4 thoughts on “Station buildings, past and present”